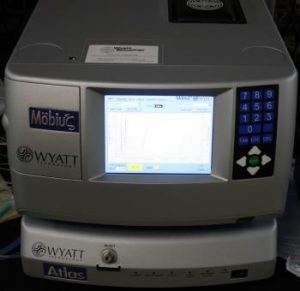 In dynamic light scattering (DLS) a detector is focused on a small volume in a sample that is illuminated by a laser beam. The detector measures fluctuations in the intensity of light scattered from this volume (in MALLS the detector measures the time-averaged intensity scattered from the same volume). The fluctuations are the result of macromolecules diffusing into and out of the small volume that the detector is monitoring. From the data the translational diffusion constant of the macromolecule is determined, which in turn can be related to the radius that a sphere with the same diffusion constant would have. This is the Stokes radius (also measured by sedimentation velocity) and contains contributions from the mass, shape and bound solvent components. A measure of the polydispersity of the sample is also derived during the analysis with higher polydispersity suggesting aggregation in the case of proteins. In some cases populations of species of differing radii and polydispersity can be resolved. Protein preparations exhibiting low polydispersity have generally proven more suitable for crystallization trials than those with high polydispersity. The method is well suited to the characterization of large polymers and liposomes.