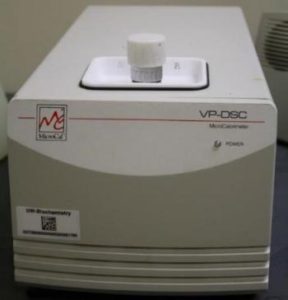 The impact of mutations on the stability of a protein, or changes in stability upon addition of ligands or excipients is often of interest. Changes in a spectroscopic observable as a function of temperature is often exploited to probe the “melting” behavior of a protein, which serves as a convenient probe of stability. Nonetheless, the use of spectroscopic tools (CD, UV/Vis, fluorescence, FTIR) requires that a unique temperature sensitive spectroscopic signature be identified, and it should be noted that different spectroscopic approaches or the selection of other wavelengths can yield different results (such differences can, however, provide further structural insights). Further complicating quantitative interpretation in these studies is the usual assumption that the transition involves only two-states (i.e., folded and unfolded), which yields a Tm and van’t Hoff enthalpy (∆HvH).

In Differential Scanning Calorimetry (DSC), the difference in the amount of heat absorbed by a protein solution and an equivalent amount of buffer is directly measured as the temperature of both solutions is simultaneously and slowly increased (or decreased). In the absence of thermally induced transitions, these data provide the constant pressure heat capacity (Cp) of the protein in solution, which in turn permits the calculation of the enthalpy change (∆H) that accompanies any change in temperature. At a thermally induced transition (e.g., a “Tm”), the protein solution will require excess heat to keep its temperature the same as that of the buffer, this excess heat capacity determines the enthalpy associated with the transition (∆Hmelt or more generally ∆Hcal). Unlike the spectroscopic approaches no model is assumed in determining the enthalpy of a transition in DSC and a single run can reveal and characterize multiple transitions. Furthermore, disagreement between ∆Hcal and ∆HvH (whether derived from the calorimetric data itself or indirectly from spectroscopic data) provides evidence that a transition is not a simple two state reaction.

As with ITC commercialization accompanied by advances in instrument design and sensitivity along with the development of user friendly software, now permits non-specialists to make reliable and accurate DSC measurements. The VP-DSC can scan both up and down in temperature from -10 to 130 °C, at variable scan rates. The sample size is <1 mL and reliable results can be obtained at protein concentrations well under 1 mg/mL. The isoscan mode of operation is suited to the study of long term stability at a fixed temperature as might be required in pharmaceutical testing. The influence of very tight binding ligands on protein stability permits the determination of the associated affinity constant, Ka up to ~1020 M-1. The thermal properties of lipids and membranes can also be examined with this instrument.