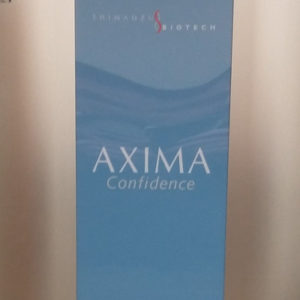 In the 1980s, soft ionization techniques that minimized fragmentation were developed and led to a revolution in mass spectrometric analysis of intact proteins, peptides, and other biological molecules. In one method, matrix-assisted laser desorption ionization (MALDI), sample is mixed with a large excess of a low molecular weight, UV-absorbing molecule (the matrix) and dried onto a target. MALDI requires little material (<1 picomole is easily measured) and sample preparation is fast, simple, and requires little if any cleanup prior to analysis. In the mass spectrometer, flashes of light from a laser are absorbed by the matrix resulting in volatilization and ionization of both sample and matrix. In the MegaTOF the gas phase ions are briefly accelerated by an electrical field after which the time-of-flight (TOF) from target to detector is measured. TOF is directly related to the mass of the ion divided by its charge, which in the case of MALDI is usually +1; therefore, one essentially has a direct measurement of the ion’s molecular weight.

The MegaTOF has been developed by optimizing the integration of a high-performance Shimadzu linear MALDI TOF mass spectrometer with a CovalX high-mass system, allowing outstanding detection of macromolecules up to 2,000 kDa. The high resolving power of the MegaTOF (especially at masses <~5 kDa) facilitates accurate mass determinations on mixtures of peptides (e.g., derived from proteolytic digestion) without prior separation. Such “mass mapping” coupled with in silico digestions of sequences found in various sequence data bases is routinely exploited in proteomics to identify unknown proteins and to map sites of post translational modification. Mass mapping of the sites of chemical modifications (e.g., cross-linking or residue specific reagents) can be used to probe protein tertiary and quaternary structure.

The MegaTOF provides a means to determine the mass of a biological molecule at an accuracy previously unavailable by other methods. The simplicity of the method and ease of use of current instrumentation makes rapid determination of highly accurate masses by MALDI-TOF possible with only minimal training. After training the instrument is available on a walk-in basis.