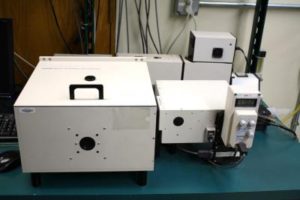 When a molecule absorbs a photon  in the UV/Vis range, it enters an excited electronic state where, in a few instances, photochemistry can occur (see: photo-cross-linking). Most often the energy will simply and rapidly be dissipated to the solvent as heat. In some cases, however, only a portion of the absorbed energy is lost as heat with the rest being re-emitted as a photon of longer wavelength (i.e., lower energy) in a process known as fluorescence (or in some case phosphorescence). The fluorimeter permits both the identification of wavelengths resulting in excitation (excitation spectrum) and also characterization of the emitted wavelengths (emission spectrum). Fluorescence measurements are extremely sensitive, allowing measurements at very low concentrations and use for quantification. The emission spectrum of a particular substituent (e.g., tryptophan or an added fluorophore) is generally sensitive to its immediate environment providing some structural insights. Small non-fluorescent molecules can greatly reduce the fluorescence from a macromolecule through a process known as quenching, which can probe the accessibility of the fluorescent substituent. The modulation of emission intensity and/or wavelength by the addition of either fluorescent or non-fluorescent molecules can be exploited as a measure of interaction. A common example is the Forster (or fluorescence) resonance energy transfer (FRET) measurement, which monitors the impact of one fluorescent molecule on another providing insights into their proximity (e.g., bound or not bound). The excitation wavelength can be linearly polarized, and the degree to which this polarization changes upon emission is measured as anisotropy (polarization). Anisotropy measurements can provide information on the size of molecules that were excited, or changes in anisotropy can be exploited as another measure of interaction.

The Quantamaster is a photon-counting instrument providing high sensitivity. The current configuration has a single sample position with the temperature controlled by an external waterbath. Both excitation and emission wavelengths are controlled by monochrometers, which facilitates FRET measurements. Automated Glan-Thomson polarizers are available for both excitation and emission wavelengths, permitting automated anisotropy measurements.